The millions of members of Generation Z, born roughly between 1996 and around 2010, coming into college and just beginning to enter the workforce have already created a reputation for themselves. This is a generation seeking to change the world. Their constant connectivity and social media savvy have made this generation much more aware of what’s going on in the world around them than previous generations. They are passionate about making their world a better place and blazing their own path. As a result, housing officers need to prepare today to meet entirely new expectations.

1. They expect a high return on their education investment

Every generation is shaped by the conversations and events taking place in their formative teenage years. Most significantly, Generation Z grew up in the wake of the Great Recession. Having watched their parents and even older siblings struggle financially, they’ve become fiscally conservative. This generation is setting goals and is studying hard to achieve them. Practical Generation Z knows the value of saving and will make cost-conscious decisions.

But this group of teens has also grown up in a world where they can be entrepreneurs at 12 years old. Generation Z grew up selling products on Etsy and launching ad-supported influencer communities. Take “Ryan” for example; Forbes reported the 6-year-old YouTube star earned $11 million in 2017 by reviewing toys. Given that a majority of Gen Zers ultimately want to run their own business, one might expect these youths to head from high school to workforce. Quite the contrary: Generation Z sees higher education as a launching pad to a high-paying career.

How does this impact student housing? Although they see value in higher education, Generation Z won’t pay excessively for it. They’ve worked hard for their money. They are already saving for retirement in record rates. Now Generation Z expects to see clear value from their purchases, including from student housing.

2. They want to connect to create change

At 18, Afghan teen Malala Yousafzai became the youngest person ever to win the Nobel Peace Prize. In 2018, the teens of Marjory Stoneman Douglas High School in Parkland, Fla., led the March For Our Lives movement and created a national platform for changing conversations around gun safety. Confronting racism and prejudice are leading concerns for Generation Z. Research shows that more than a third of Gen Z has donated time or money to a cause they care about, and a quarter has boycotted an activity or company. Protests are back in style.

This has major implications for student housing, particularly related to contracted services such as dining which can sometimes be seen as an extension of campus housing. Housing officers will be best served by maintaining a focus on customer service and rapid responsiveness.

As this group looks for a way to make a difference, they want to connect with their peers to discuss issues and find solutions. This translates to housing with on-campus residences that offer housing based on shared student interests. Special interest communities might be formed around topics such as making a difference, leadership, or wellness, while living-learning communities may be formed around topics of study.

3. They see environmental responsibility as a given

Generation Z grew up taking part in conversations around environmentalism, and they see sustainability as a necessity. More universities and colleges are taking steps to establish sustainability initiatives, and this should extend to campus housing. These students want environmentally responsible buildings. For example, if the campus dining hall composts, apartment housing should consider getting creative about providing students an opportunity to compost as well. From green roofs to green design choices like LED lighting, high efficiency washing machines, and low-flow shower heads and toilets, these choices are truly important to students searching for a place to live.

Why this matters to you

Every generation brings its own unique expectations to school, but with today’s competitive forces at play, it’s critical that higher education housing officers are more responsive than ever in meeting these expectations. Because this change is happening fast, flexibility will be key for many housing officers who are looking to attract Generation Z students. By understanding this generation’s unique drivers, housing officers can create an environment that attracts top students while making the world a better place.

For more, download our Executive Guide: Is Your Student Housing Ready for Gen Z? 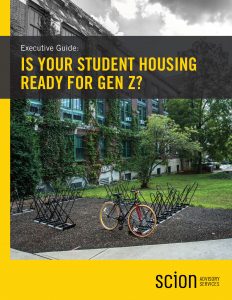