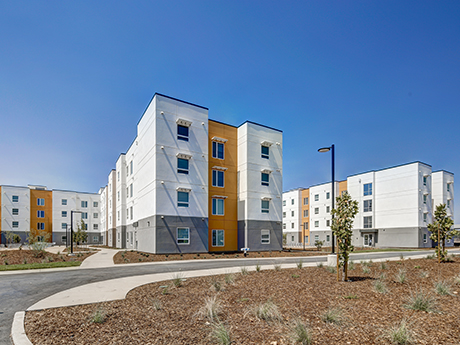 Michaels Student Living delivered the 3,400-bed Green at West Village for its P3 partner the University of California Davis in fall 2020.

The pandemic isn’t entirely behind us yet, but many colleges and universities see the writing on the wall when it comes to funding future on-campus housing projects. Tighter budgets, more privacy, possible future closures, and nearly two years of delayed, deferred or canceled projects have driven a wedge between what establishments need to offer their students to remain competitive and what they have to work with.

Enter public-private partnerships (P3). These arrangements between private investment firms and public universities have been bridging the funding gap for nearly 20 years. In a post-COVID world, however, their presence isn’t just appreciated, it’s vital in many instances.

“COVID has shown how important P3 relationships are for institutions facing budget cuts and higher costs,” says Michael Leonczyk, director at Chicago-based Harrison Street. “There is a growing acceptance of P3s as a critical vehicle to allow higher education institutions to stay on the cutting edge when it comes to retaining and attracting students and ensuring they have access to resources that facilitate their academic and social lives. This includes housing, dining, parking, energy, water and athletics.”

In 2003, there were three higher education P3 transactions, which totaled $100 million. By 2016, this number had swelled to 28 deals totaling $3.1 billion, according to Ernst & Young. Today, Washington, D.C.‐headquartered development advisory and program management firm Brailsford & Dunlavey, which recently released its “Higher Ed P3 State of the Industry” report, is tracking about $11 billion worth of projects in the pipeline.

Jay Pearlman, senior vice president of The Scion Group’s Advisory Services unit in Chicago, certainly believes the numbers. He knows universities are dealing with layouts and unit types that have fallen out of favor with students due to health and safety concerns. He also knows deferred maintenance is at a record-high level. Put the two together and it equals a significant need for housing renovations and/or replacements.

“Unfortunately, many schools will not be in the position to perform these updates as institutional operating costs rise and revenue streams remain strained,” Pearlman says. “What capital and debt capacity is available, including from significant federal government funds, will often be prioritized to academic and other core purposes.  As a result, we expect to see an increased number of institutions exploring alternative financing and public-private partnerships. Certainly the amount of activity our team has seen in providing feasibility, student housing planning and implementation services confirms this.”

“Community renovations, which often also tackle deferred maintenance, may result in a net loss of available beds if density is reduced or units are converted into community space,” he explains. “This necessitates the development of strategically valuable new communities. Likewise, some institutions are considering new on-campus housing policies that may require new development, resulting in additional bed capacity. All in all, P3s offer universities an attractive alternative to more quickly implement student housing master plans and achieve institutional strategic objectives.”

This was the case at Appalachian State University in Boone, North Carolina. The school sought to replace all of its core campus dorm housing with modern residence halls in an effort to support and enhance its strong freshmen retention rate. The university entered a P3 with Georgia-based RISE on the three-phase, $191 million development, which will replace six dorms totaling 1,700 beds with four modern dorms and 2,300 beds.

Residence Halls Raven Rocks and Thunder Hill were delivered in August 2020, while Laurel Creek Hall was completed one year later. New River Hall and the Peacock parking garage are slated for delivery in August.

“This residence hall, and the many other projects in progress on our campus, represent the future of App State,” she said during the event. “At a time when the focus has been very much on the day to day, we also have our sights on the horizon — anticipating the needs of the Appalachian community and planning for generations of Mountaineers to come.”

Greg Blais, president of RISE, also noted the challenges of developing such a large-scale project during a time of industry upheaval.

“Although we had to quickly adapt our plan due to the disrupted financial markets, we were able to achieve a record-setting cost of capital in our ultimate financing approach, as well as lock in all of our construction pricing before the huge spike in wood framing that occurred just a few weeks later,” he says. “This was a product of the intense flexibility, collaboration and collective industry experience that went into making the optimal decisions on the project’s behalf, which is now proving to have added tremendous value to the P3.”